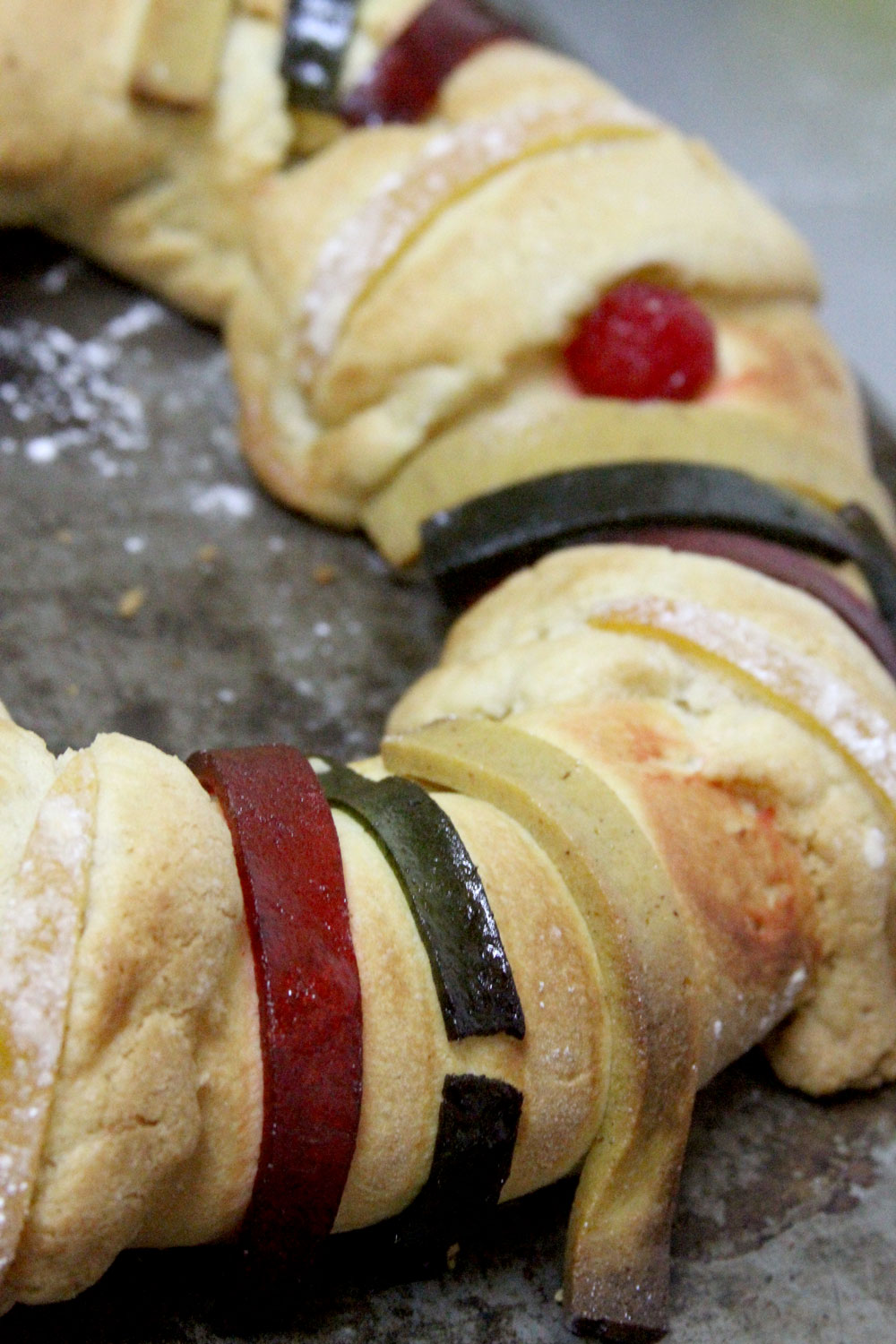 Holiday festivities in Mexico are not over until after Three King’s Day and that means that the Christmas tree, lights, nativity scene and other decorations have to stay up at least until January 6th. This day, also known also as Epiphany day, is celebrated exactly 12 days after Christmas, and just like almost every other important celebration in Mexico, there is special food involved.

During the first few days of the year most bakeries and even supermarkets fill their shelves with rows and rows of boxes of Rosca de Reyes or King’s wreath, a traditional Mexican pastry. The festivity is in remembrance of the three Magi visiting the Christ child at the manger and presenting their gifts of gold, frankincense and myrrh. A very similar version of this sweet treat can also be found in France and Spain and cities like Quebec and New Orleans. Toppings, fillings, and shapes may vary from country to country and they range from square-shaped, round or oval, stuffed with frangipane, topped with confectioners sugar, made from brioche, or puff pastry. In France the cake is known as gallete de rois and bakers hide a fava bean inside which allows its finder to be “king for a day” and rule over everyone sharing the meal, while wearing a paper crown.

In Mexico the pastry is oval or round, and traditionally topped with crispy sugar frosting (everyone’s favorite), crystallized fruits such as figs, orange peel and a candied cactus called acitrón — which  in the last few years has been banned since the plant has been classified as endangered. Bakers have been forced to switch out the cactus for a red or green tinted jam very similar to quince paste. The dough is very similar to a brioche (just a little bit spongier) and a plastic baby Jesus is baked inside to symbolize Mary and Joseph finding a safe place for the christ child to be born as King Herod sought to kill him and all firstborn sons. People in Mexico get together the night of the 5th or the 6th as families, friends or even coworkers. The drink of choice is usually a frothy and cozy hot chocolate and people sip it while taking turns cutting the cake. While each person in turn cuts their own piece of the rosca (there’s no specific order and so you can choose even a random spot), everyone else is inspecting their own slice carefully, even poking it with a knife just to make sure the plastic baby Jesus isn’t hiding inside.

Whoever gets the plastic Jesus is obligated to host a party on February 2nd, Candlemas Day (Candelaria), gathering together the same group of people present on Three Kings Day. A serious amount of tamales and atole (a thick and sweet drink made from corn masa) is served to all the partygoers.

The night of the 5th is also an important date for Mexican children. Some write a letter to the Magi with a list of desired toys, roll the piece of paper and tie it to a ballon. Others put the letter inside a shoe that’s placed next to the christmas tree. Kids wake up early the next morning to find out if their requests have been completed and they got any presents from the kings.

There’s a recipe for the Mexican King’s Cake I got from my friend Aldo who owns a bakery, click here to check it out!