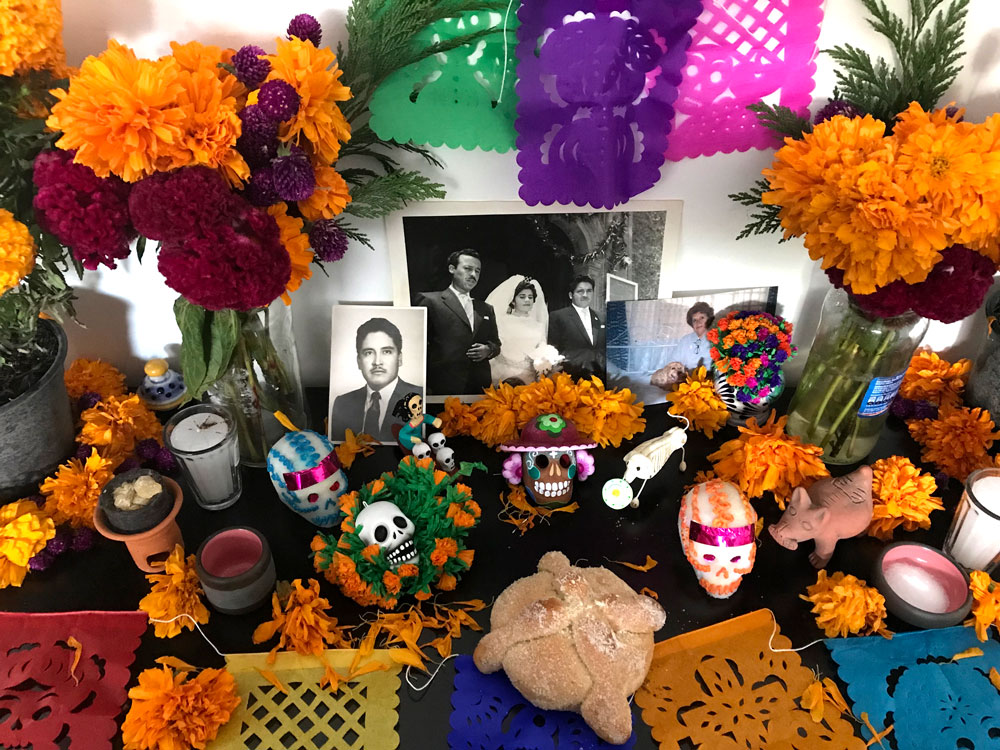 Day of the dead Altar

Day of the dead altar

Day of the dead is one of Mexico’s most iconic holidays and is now known throughout the world. Named as Intangible Cultural Heritage by the UNESCO in 2008, Día de Muertos is when we remember and honor our deceased loved ones, with the hope that they will travel back from the underworld to visit us for the night.

This holiday is syncretism in its whole expression. Today’s Day of the Dead rituals are the combination of beliefs and traditions that have merged into now what is one of Mexico’s most diverse holidays. Its origins date back to prehispanic times. The central and southern regions of the Mexican territory once known as Mesoamerica where inhabited by many different indigenous groups and this months-long celebration was integral to their yearly religious rituals.

The 3,000-year-old celebration was originally held during the summer months of July and August, with a single month for honoring deceased children, and one for adults. Rites and rituals were dedicated to the goddess of the underworld Mictecacihuatl (an echo of which you can see in today’s Catrina skeletons). It was common for indigenous practitioners to keep the skulls of the dead and include them as part of their altars.

The Spanish colonizers were offended with many of the pagan traditions of Mexico’s original inhabitants. The Catholic Church, which as you know played an outsized role in the colonization of Mexico, would eventually enforce a change to the dates of the celebration so that it coincided with the Catholic festival of All Saints Day at the end of October.  More than simply a day of remembrance, Day of Dead is an invitation for those that have gone before to come back for a night and visit the living left behind.

Nowadays people still welcome their relatives by visiting their gravesites and bringing along goodies such as food, candles and even mariachi bands! They go to simply be with them. Others, set up altars in their houses and wait for the spirits to visit.

The altar, also known as an ofrenda consists of a table filled with food and various other offerings to the souls of the departed. They can vary from state to state but always consist of the following basics.

A Picture of the departed.

In order for the spirits to recognize who the altar is dedicated to, a picture of person to be remembered is set in the middle of the table or in the wall right behind it

A flower, similar to marigold, called Cempazúchitl or the Aztec marigold, is used throughout the country during this festivity. Their smell and yellow petals are thought to guide souls home along with the light of candles and the scent of incense.


The Deceased favorite’s food and objects.

Dishes and foods the deceased enjoyed in life, such as enchiladas, mole or rice, are provided for them to feast on during their visit. According to legend, after the night has passed, the dishes have lost their “essence” and are therefore inedible for anyone else and have to be thrown out. Objects like cigarettes, books and toys are also offered for the enjoyment of the returning spirit.

Day of the dead bread.

Starting in the middle of October, bakeries start to make a very special pastry just for this celebration. Its presentation varies a lot, but in the central parts of the Mexico it’s a round bun made with orange blossom perfumed dough and topped with a crust made with stripes of dough and dough balls that represent a cadaver’s skull and limbs. The bun is dusted with white sugar or smeared with butter and sugar. Definitely my favorite element in the altar, I really wait all year round just to get a hold of the delicious pastry all over the city. I’m also posting a recipe you can check it out here.

Water, Salt and a Spirit.

Since the souls make a very long and tiresome journey, they are offered water to quench their thirst and even a shot of Tequila or rum to make their stay more enjoyable. A plate of pure salt is set out to purify the spirit.

A splash of color is added to the altar with sugar skulls and papel picado — tissue paper flags with intricate designs cut in to them.  Although nowadays the skulls can be made out of amaranth or chocolate, the traditional ones are made of white sugar, decorated with tinted frosting, and have a name written on their forehead. The tissue paper flags come in many different colors and the carved out images of skeletons are present in every altar.

If you want to live the whole experience of a Day of the Dead in Mexico City in 2021 join our mailing list to know about the special experience we’re preparing for you!