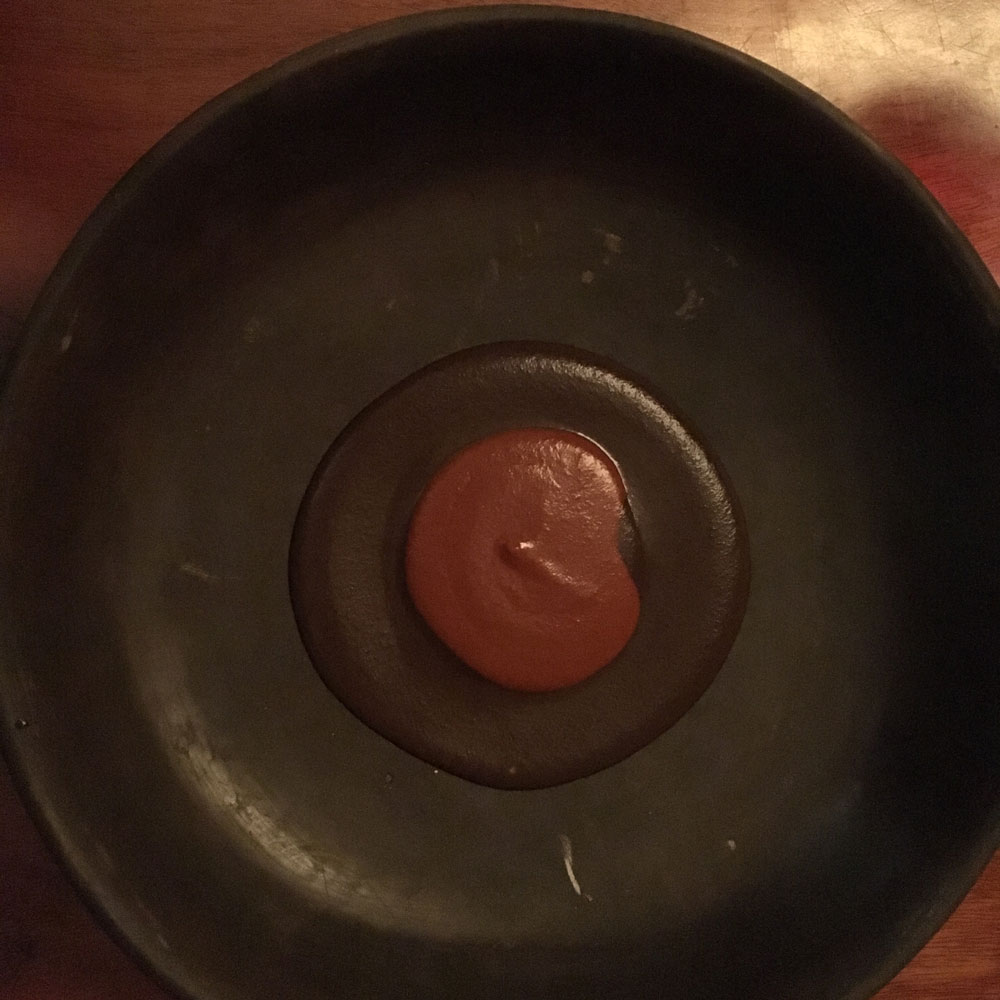 Mole, which is now one of the most representative dishes of Mexico, is a very misunderstood food. Most people would associate the rich sauce with chocolate, but the truth is, there’s not one single ingredient that makes Mole a Mole, but it’s more like . What is now an intricate and very baroque dish has its origins in the Prehispanic times; the word Mulli was used to describe a very simple mix of tomatoes and chilies, that was always served over other foods and never eaten on its own. Fish or any other meats could be the best companion and in special occasions a more complex version of the sauce was prepared incorporating ingredients such as nuts and seeds.

When Spaniards arrived to the continent and brought with them their language, religion and traditions, they also introduced a huge array of new and diverse ingredients, giving the cooks an infinite number of possibilities. Mole began, evolving alongside the culture and was constantly adapting to the new acquired tastes and traditions of the emerging nation.

I would consider Mole as the Mexican version of curry, in the sense that it is a sumptuous sauce composed of many different ingredients, served alongside vegetables, chicken or pork. Also, due to its labor-intensive making process it’s a dish that is mostly served in big occasions and festivities such as weddings, baptisms graduations and even funerals (which you would still see happening in places like Oaxaca and its surroundings), where many family members are expected to gather and it is custom to prepare just one big batch of the rich dish that could feed a big congregation of people – sometimes even for a couple of days.

The recipe for mole varies from family to family and it’s usually a well-kept secret passed down through generations. Ingredients tend to be completely different depending on the region of the country where it’s made, but chilies, nuts and seeds are the most commonly used. Beyond the basic base, often more than twenty ingredients are used in the recipe. Furthermore, though the technique might not be the most complicated one, it is a time consuming job.

Setting regional variances aside, a very simple kind of mole would at least use 4 different kinds of dried chilies such as ancho, pasilla, mulato and chipotle (seeds and stems off), as well as other ingredients like almonds, cinnamon, onion, garlic, day old bread, plantains, cloves and raisins.

This results in mole having very diverse flavors that can range from bittersweet to spicy and very diverse hues from yellow and green to a dark black and reddish brown and even white or pink moles!

The difficulty relies in frying each ingredient individually, which is the only way to get the best flavor out of everything, making sure that nothing is burnt, over or under roasted which sounds way easier than it is. All components are then ground and mixed,   is used for this process, until resulting in a thick paste, even the chili seeds that were set aside at the beginning of the process, after being toasted they’re added carefully to the mixture controlling the amount of heat desired in the sauce (so not all of them are spicy!).

Needless to say the smells inside the kitchen while preparing the sauce are incredibly aromatic and can only be compared to the wonderful flavors of the dish on the day after the making, when all the flavors are perfectly welded together.

Due to its arduous method, today it can be bought pre-made in stores and markets in the form of either a paste or a powder, to be then reconstituted with any type of broth, thus shortening the time spent in the kitchen preparing it and making it easier for people to have mole at home.

Traditionally mole was served with turkey, but it’s now more commonly found served on top of a single piece of chicken or pork with rice on the side and with a stack of warm tortillas.

The luscious dish that was once only reserved to be consumed a few times a year in remote towns in the countryside has made its way to some of the finest restaurants in the capital city, making an appearance on practically every Mexican table and menu.

For example, in Mexico City, Pujol has one of the most famous mole dishes: Mole Madre (see the first picture of this post), a dish that’s been simmering down for hundreds of days and it’s normally served alone on a big plate next to a “new mol” made every single day and a tortilla with hoja santa.

Even if the real origin remains unknown, Mole is a culinary icon that has been evolving alongside the country’s History; it’s a symbol of the syncretism between its European and indigenous backgrounds.

And as the head chef of the previously mentioned high-end restaurant Enrique Olvera, once said in one of the weirdest videos I’ve ever seen:

Mole doesn’t taste the sum of its ingredients, it tastes like Mole

Here’s the strange video, take a look so you can judge it.

*This post is inspired in a text I wrote for the blog Que Pasa! you can read it here.

Want to know more  and try lots of Mexico City’s food, moles, markets and tacos? Join one of our food tours with my company called Devoured!